4 Teen Drug Trends That You Should Be Aware Of

Drugs tend to compete with one another for popularity, with some fading away into the background before resurging into the mainstream once again. It can be hard for parents to keep track of what drug trends are currently popular amongst teens, as not all drug trends involve well-known drugs. For parents of teenagers, there are several drug trends that you should be aware of.

Combining the innocence of glow sticks with the concept of Pharm Parties, Glow Parties usually appeal to young teens. Drugs like molly are available and sold at these parties. Attendees will dance under strobe lights and wave glow sticks as music plays, much like a rave, in order to heighten the effects of the drugs. Glow Parties are usually alcohol-free, which can make them seem fairly innocent until drugs are added into the mix. The events tend to be secretive, making it difficult for parents and law enforcement to find, prevent, and end them. 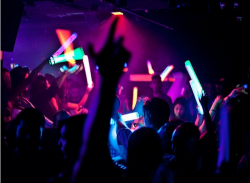 Glow parties are popular among teens and drugs such as molly are often consumed.

Gravel is a combination of multiple drugs, usually crystal meth and bath salts. While those two drugs are dangerous on their own, gravel usually has additional ingredients. Toxic chemicals like ammonia or rat poison are added to the mixture as fillers. Gravel has the same appearance as its namesake and can be ingested by users in multiple ways. It is often easier for users to eat it, and is the most common method of consumption. Gravel carries a high risk for fatality, and some of the fillers can cause instantaneous death because of their high toxicity levels.

A synthetic variant of marijuana, sharing a chemical with similar properties to THC, Mojo and similar products are usually designed to avoid legalities. According to the NIDA, while Mojo and other synthetics tend to be far more dangerous than marijuana, although they are similar on a molecular level. There are severe consequences with using synthetics, including overdoses, aggressive behavior, and suicidal thoughts. Depending on the chemical composition of the drug, other symptoms may involve nausea and vomiting, seizures, hallucinations, anxiety and paranoia, and racing heartbeat. Other names of synthetics like Mojo include Cloud 9, Spice, Crown, Scooby Snax, K2, and Relax.

Purple drank may be a trend that some parents have heard before. It has been a trend for decades, fading in and out of practice. Also known as Sizzurp, Purple Drank involves teens drinking prescription cough syrup mixed with soda. The NIDA explains that there are some cough medicines, both prescription and over the counter, that contain ingredients with psychoactive properties. These mind-altering ingredients, like codeine and promethazine, are usually opioids which produce a sense of euphoria and relaxation when consumed. The higher the amount, the stronger the effects and the higher the risks are for adverse side effects.

If you or a loved one is struggling with addiction, please know that there is help available. Consider contacting us through our website or call us at 800-721-8114 to speak with one of our caring specialists about your recovery options.