The Role of Shame and Guilt in Addiction Treatment

The therapist has been calling. Or, maybe it’s a sponsor. It could be a counsellor. Someone out there wants to know why you are missing appointments and meetings and you aren’t answering those calls. Why not?

For a lot of people in recovery, backsliding happens and when it does, people close themselves off. But, why? Staying open could make the difference between a small issue and a full-blown relapse. Surely, the smart thing to do is to reach out when you are in trouble.

Yes, that is the smart thing, but this behavior is fully rooted in the emotional and not in the logical. Two feelings in particular are why people run away from others when they have done some backsliding: shame and guilt. These two emotions wield incredible power over the vulnerable recovering addict, and they aren’t wielding it for the forces of good.

If you have been overtaken by shame and guilt and it is threatening your sobriety, you need to get some outside help. Contact Centers.com at 800-721-8114 and speak with someone today. 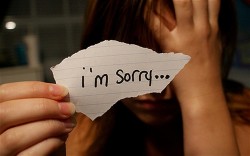 Drug addicts often carry a lot of guilt due to the immoral behaviors they took part in.

All people feel shame and feel guilt. They are very common emotions, but they are even more common for those who have an addiction (whether they be actively addicted, in treatment, or in recovery). But, why is that the case? What is making addicts feel such overwhelmingly negative emotions? It is all related to incorrect views about addiction held by society.

NIDA observes: “Many people do not understand why or how other people become addicted to drugs. It is often mistakenly assumed that drug abusers lack moral principles or willpower and that they could stop using drugs simply by choosing to change their behavior. In reality, drug addiction is a complex disease, and quitting takes more than good intentions or a strong will.”

Essentially, drug addicts are told from many different sources that their addiction is the result of not trying hard enough to fight it. They begin feeling guilt and shame over lacking the will to control their demons. But, addiction is a chronic brain disease and most people can’t fight it alone. That’s not a reason to feel unending shame.

Addicts have many reasons for feeling guilty, including:

Unfortunately, many addicts cope with this loss by trying to numb the guilt and no method seems simpler to an addict than substance abuse. Yes, your relief may be temporary but it is still a relief from the self-hatred. Overtime, an individual can begin using to forget about the guilt and shame of using. It is a dangerous downward spiral.

Shame and guilt can be easily lumped together, but that does them a disservice. They each work much better separately. An archived manual from the National Institute on Drug Abuse (NIDA) clarifies that difference. “Shame refers to negative beliefs about oneself; for example, one is a weak, worthless, or deficient person. Guilt refers to the belief that one has engaged in wrongful behavior, such as stealing to obtain money for drugs.

So, you feel shame about yourself and guilt about your actions. Of the pair, shame is the more dangerous and difficult to overcome, but both lead to an increased potential for relapse.

There is no absolute way to permanently escape shame and guilt, but there are a few techniques that help.

Meet with a therapist, sponsor, or related professional and admit to shame and guilt. Explore these feelings and acknowledge how they can push you into a negative spiral.

In the right time and circumstances, make amends to those who were negatively affected by your behavior. This can help you deal with your guilt and develop more self-esteem.

Work on a personal inventory, in which you truthfully record your behaviors and feelings. Look for patterns and use it to keep you accountable. This will lead you have more affection for yourself.

If you are tired of being ruled by negative emotion and you would like help getting clean, call Centers.com at 800-721-8114.

How to go through Drug Addiction Treatment Successfully