You Need to Get Help Before You Get a DUI

If you have a problem with using alcohol in sensible and measured ways, you have probably driven drunk on at least one occasion. Perhaps, you justified it because you were only buzzed. Maybe you hadn’t had a drink in an hour, but your alcohol level was still pretty high. There’s a chance that you had a drink and then had to pick someone up because it was an emergency. All of theses situations could lead to serious problems.

There are a lot of situations where the simplest solution seems to be driving while not completely sober. In fact, the Centers for Disease Control and Prevention (CDC) reports adults admit drinking and driving nearly 112 million times in 2010. 112 million times. That’s very often. But, it makes sense when you take into account that 85 percent of those were reported by binge drinkers.

Alcohol messes with your brain function and your ability to make decisions. You can’t say, “The booze made me do it.” But, “the booze” will make you care less about the consequences for your actions. It will tell you that you are sober enough to drive or that you are unlikely to get pulled over. Hey, you are a great driver, right? Your drunk brain thinks you can do it.

If you are in danger of making these sorts of decisions because you tend to binge drink or you drink often enough that you aren’t capable of properly evaluating the consequences of your actions, you need to seek help. A DUI is one thing, and a very serious thing, but you may also be risking your life and the lives of others.

Centers.com can help you to locate a treatment facility that can address your alcohol use disorder before you run the risk of driving drunk. Don’t wait until you are already involved in the legal system. Calling 800-721-8114 can get questions answered and rehabs recommended. Don’t wait; call now. 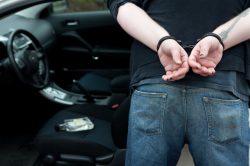 Driving under the influence puts yourself and others in serious danger.

OK, there are a number of different acronyms that get used when you are driving while drinking:

Overwhelmingly, the laws refer to being in charge of a vehicle while you are intoxicated. You may not even need to be driving the car at the time you are charged. Even if you are sitting in the driver’s seat and holding the keys, you can be charged. You really don’t have to be driving in many states.

Your blood alcohol content (BAC) is what is measured to determine whether or not you will be charged. The following levels cause the following responses:

All 50 states have set 0.08 percent BAC as the legal limit for driving. Any amount of alcohol over that causes you to be charged. If you are a commercial driver, the limit is 0.04 percent.

If you are binge drinking or have an alcohol substance use disorder, you know these levels of BAC. You shift between them regularly. But, you shouldn’t be. You need help.

In all states, your first drinking while driving offense is enough to land you in jail. If your BAC is on the higher end of the spectrum, you may face a longer jail sentence. If you kill or injure someone while driving drunk, it is considered a felony and you may spend years in jail. This is also true of your third or fourth DUI.

You will also face fines. They can be quite high.

You are very likely to lose your license for a considerable period of time. Some states may seize your car or cancel its registration. You may also have an alcohol sensor attached to your dash.

The consequences of a DUI are steep and you need to get your drinking under control so that you don’t have to be punished for driving drunk. To find a program that can help you, call 800-721-8114. Don’t let another trip pass when you convince yourself it is OK to drive.

What Does an Alcoholic Look Like? The Functioning Alcoholic