Is Your College Student Abusing Alcohol?

College is a time of experimentation and popular culture lets us know that cram sessions are just as likely as keggers. It’s a right of passage, right?

Kids need to blow off steam when they aren’t studying and college should be one of the best times in their life. They are making memories. Unfortunately, the consequences of college drinking—specifically the alcohol abuse disorders signaled by binge drinking—are costly to your child’s health and wellbeing.

If your college student isn’t prepared (and sometimes even if they are) it can be extremely easy to slip into problematic drinking patterns. Studies show that college students drink more heavily than their non-college peers and that they increase their drinking very rapidly, which can lead to more troubling patterns. Given the power of peer pressure, even the most motivated college student can develop and alcohol addiction.

If you are the parent or guardian of a college student, you may be right in worrying about their drinking. In addition, their drinking may also be putting them at risk for other substance abuse disorders and general risks to their overall health. You probably did all you could to educate them and to protect them, but you can’t control everything. You need help.

To get help finding treatment centers, learning about alcohol addiction, and accessing resources, call Centers.com at 800-721-8114 and speak with someone knowledgeable. They can hold your hand as you guide your child to the help they need. 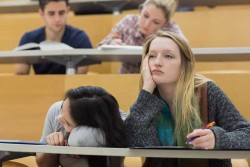 Alcohol abuse can lead to a decrease in academic performance.

You might be wondering how widespread alcohol abuse is on college campuses. The National Institute on Alcohol Abuse and Alcoholism (NIAAA) lists the following facts:

Binge Drinking is a term that gets thrown about a lot and it can be hard to determine what that actually means. If you worry that your child is binge drinking, are you worrying about them drinking a six-pack of beer or about them downing a bottle of vodka?

The NIAAA defines binge drinking as a pattern of drinking that brings blood alcohol concentration levels to 0.08. This stereotypically occurs after 4 drinks for women and 5 drinks for men, over a period of 2 hours.

The Substance Abuse and Mental Health Services Administration (SAMHSA), who conduct the annual National Survey on Drug Use and Health (NSDUH), defines binge drinking as drinking 5 or more alcoholic drinks in the same circumstance on at least 1 day out of the past 30 days.

Based on both of these definitions, the six-pack and the bottle would both be considered binge drinking. A study funded by the National Institutes of Health showed a single alcohol binge could cause bacteria to leak from the gut and could increase levels of bacterial toxins in the blood. That’s terrifying.

The 12.2 percent of college students engaged in heavy drinking are actually drinking 5 or more drinks during one occasion on 5 or more days out of a consecutive 30. That’s a lot of drinking. And the risks may seem obvious, but I bet you haven’t thought of all of them.

The NIAAA has compiled some startling findings:

If you feel your child may be at risk and you want to get him or her help, the time to start is now. Call Centers.com at 800-721-8114 and get the help you and your child need.