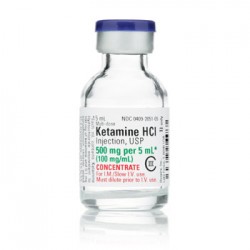 Ketamine addiction is a real addiction that you need to watch out for!

Ketamine addiction is not considered to be physically addictive but the psychological nature of the addiction can be overwhelming. That is not to say that the abuse of this drug does not physically affect the addict. Far from it, the abuse of this drug can cause a multiple range of permanent effects both physically and psychologically and will vary from person to person. Addicts who began using this drug experimentally, soon found themselves addicted to the short “out of body experiences” and euphoric “highs”. The drug, commonly known as Special K, has become popular among teenagers and younger adults and after several usages, withdrawal symptoms such as depression, irritability, or insomnia. Top Ketamine treatment centers focus on the specific needs of the individual and the presence of other co-occurring addictions which are common among Ketamine abusers. Medical professionals and addiction specialists will work with the addict to determine the proper course of treatment that best relates to their circumstances.

Ketamin is normally used as an anesthetic in veterinarian or pediatric medicine but, may be used in other ways such as a fast acting anesthesia in emergencies when combined with a sedative, or occasional treatment of depression in bi-polar disorders and major depressive disorders. It is classified as a schedule 3 drug and is only available legally by prescription. Ketamine produces a psychedelic effect by essentially dissociating the brain from the body’s central nervous system causing hallucinations, visual distortions, lost senses of time, senses or identity. The effects are typically short term but, the intensity of the “high” has emerged as a phenomenon among drug abusers. The illegal street names include Special K, Vitamin K, Kit Kat, Cat Killer, Cat Valium, Super Acid, Super C, and more.

The psychedelic effects or “trips” associated with Ketamine use is the leading reason this drug is so habit-forming and psychologically addictive. The drug has been used recreationally since the 1960’s and there are many different ways Ketamine is made available on the street. It even has its own language for associations with other drugs or among abusers such as “K-hole” which are periods of confusion or the depressing results of the experience, and “Kitty flipping “ which is a combination of Ketamine and MDMA Purple. The association of this drug with its pleasurable effects leads to continued abuse. After a while, the lack of use causes withdrawals, consequently, psychological cravings for more.

Ketamine abuse can cause many physical and psychological effects that may be permanent. This addiction often results in impaired cognitive functions, memory loss, binge behaviors, kidney and bladder damage, learning difficulties, slurred speech and more. Combination drug usage is common and can lead to more severe addiction, resulting in unmanageable situations involving relationships and normal functions in life.

Common Ketamin withdrawal symptoms include emotional distresses such as irritability, depression, insomnia. While these symptoms are considered psychological, other symptoms may be present when there are co-occurring addictions.

Have money or private insurance? If you can afford private treatment call us now:

There is hope for the Ketamine addict. Treatment typically will involve several steps including addiction behavior modifications. The withdrawal process can be monitored and managed to include dual diagnosis situations and co-occurring addiction withdrawals. The treatment options will vary according to the needs of the addict and will depend on age, gender, length and severity of drug abuse. Treatment is available in variety of settings that include outpatient, inpatient, and residential. Counseling programs included individual, group, and family sessions. Education, therapies, and behavioral management techniques such as anger management sessions and Cognitive Behavioral Therapy may also be included.

Call800-721-8114and get help today! Who Answers? Submit a new center or provide corrections to an existing one ›